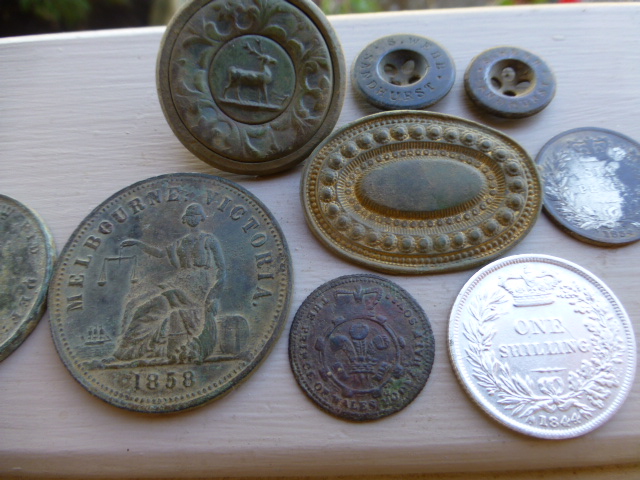 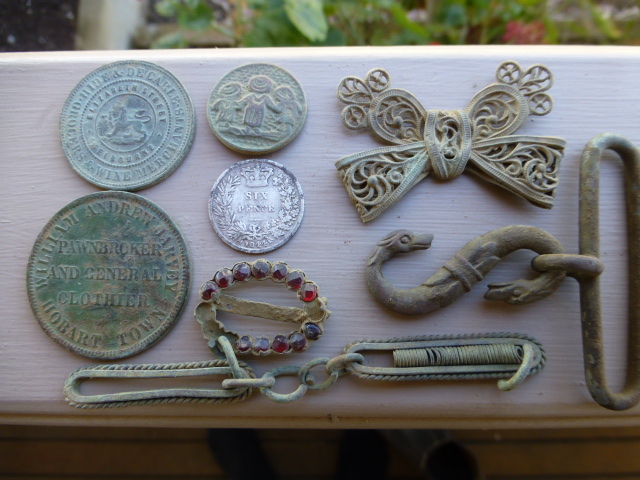 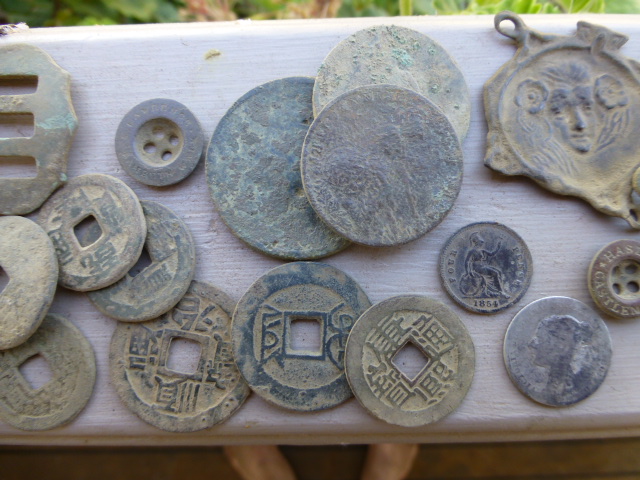 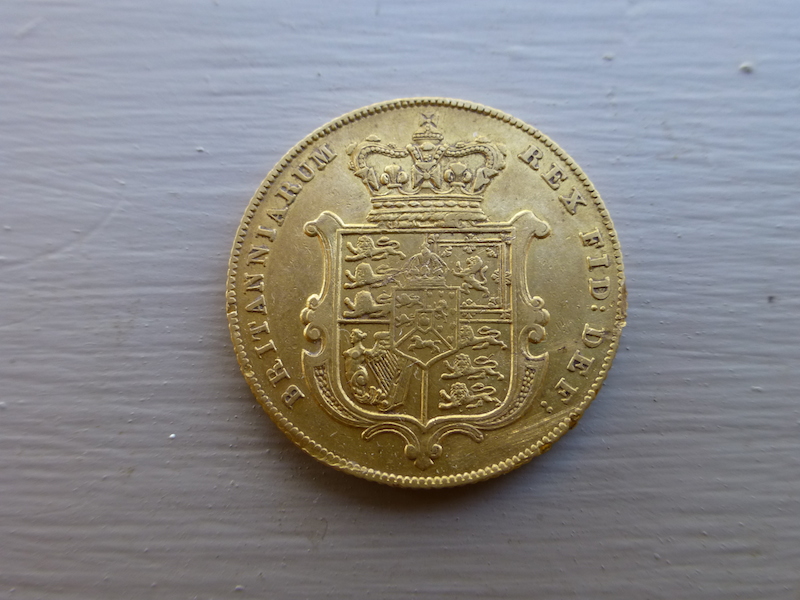 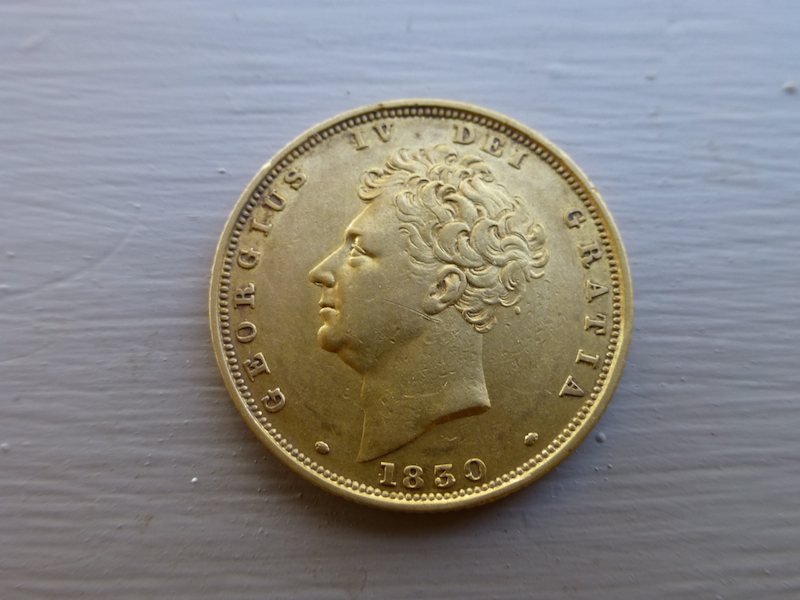 I hadn’t had a spare full weekend to go relic hunting with my Minelab CTX 3030 for a month or so since I was lucky enough to find an 1856 Sydney mint half sovereign.

Saturday I had walked into an old mining area in central Victoria which had been mined by hundreds of diggers from about 1852 through until about the 1870’s or so. Normally most of these areas have been detected by someone over the years but I immediately noticed that there was a lot of easy, large non-ferrous targets laying around on the diggings, and shallow, which suggested I may have been one of the first here!

This is always exciting, but rare to find these days for myself. Encouraged by this I spent most of Saturday digging hundreds of old metal objects with some interesting finds including a nice cricket belt buckle and a few silver shillings, among other things. It was a large area and I hoped that if I spent time and dug everything, that I could be lucky enough to find another gold sovereign!!

This has always been on my mind since finding my first one 2 years ago! The Sunday I went back to the same area and it wasn’t long before I had another gold coin in my hand, from only about 5-6 inches deep !!

This time, a beautiful 1858 Sydney mint half sovereign, and in exceptionally good condition. I couldn’t and still don’t believe my luck. I was also lucky to find a nice traders token and yet another cricket themed buckle. 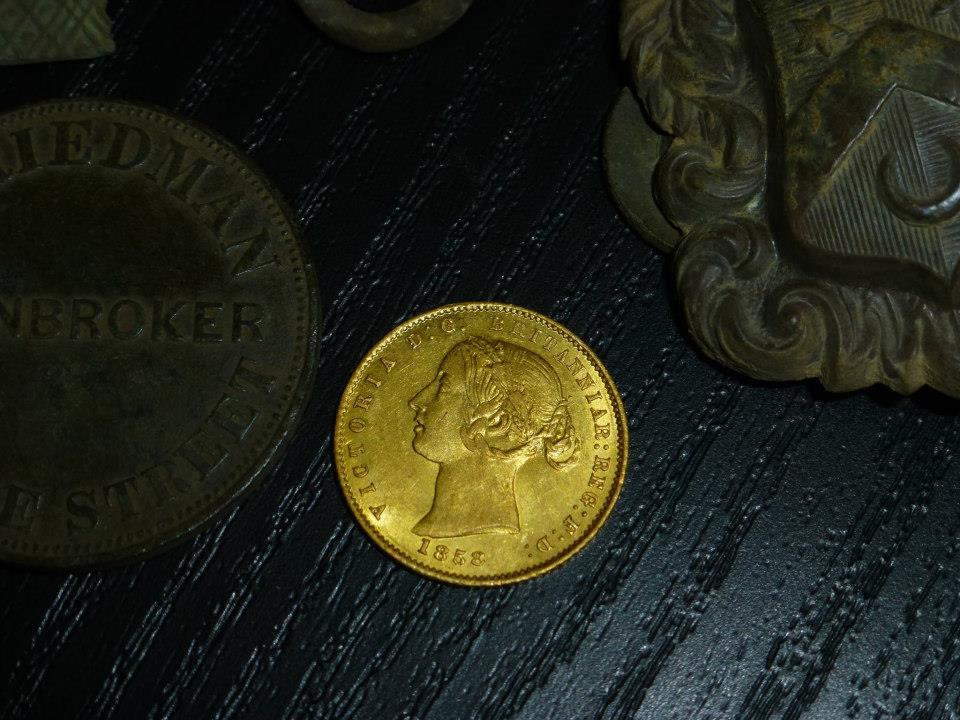 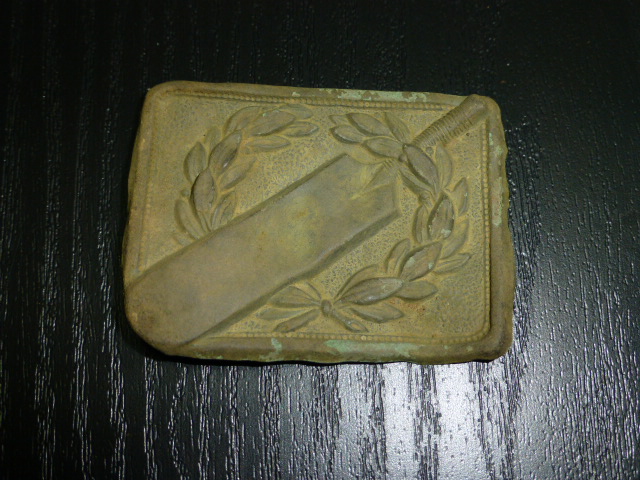 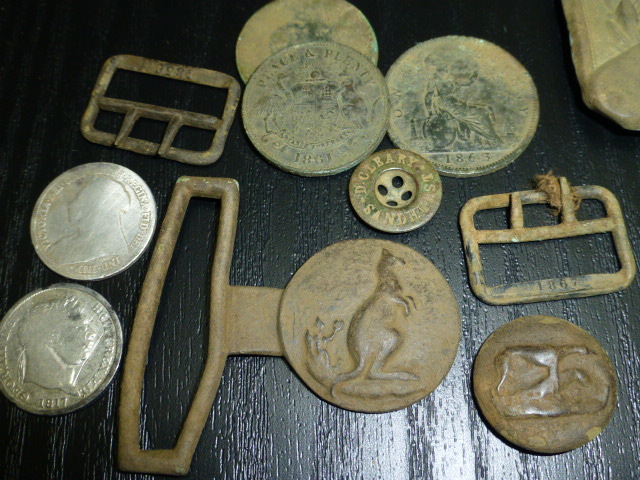 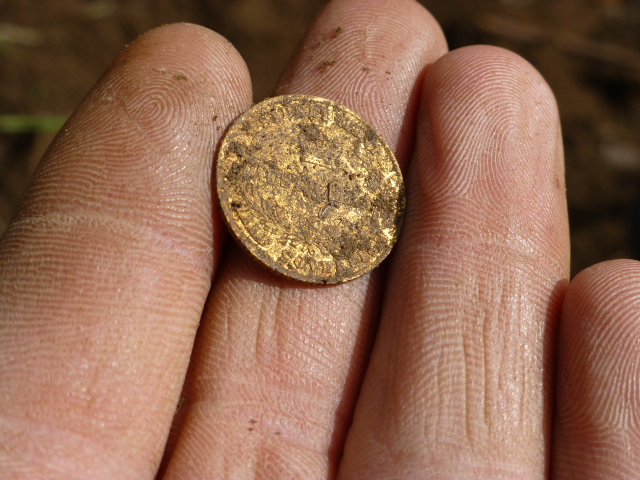 I hadn’t had the relic detector out for about two months so I was fairly keen on a couple of days out the bush with the Minelab CTX 3030, hoping to find another coin or two.

I had chosen a spot which I, and many other detectorists over the years had found many old items from the original miners, as well as some gold nuggets. I was prepared for targets to be scarce and few in this location but i was in the right mood and felt that it was worth putting in the hours for possibly nothing. I obviously had a little faith that this “thoroughly detected” location still had a treasure or two left if i put enough time in!

After perhaps 6 full hours of detecting with only a small handfull of missed “junk” targets I was becoming increasingly discouraged by my choice of detecting sites, with my mind telling me I’ve wasted my time. In this state of mind, my detecting technique often becomes sloppy and deteriorates as the day progresses. It was while in this mood that i casually swang the coil over a very brief and vague target and it didnt sound to me like the detector was very sure about it.

I almost ignored it, but for some reason I stopped and slowly investigated it. Still being unsure if it was even a non-ferrous target, I scraped back the compost surface probably 3-4 inches and retried the signal. Getting the coil those few inches closer to the target now convinced me it was a definite non-ferrous target, and being a 12:21 ID, I briefly assumed another button was down there, as some other brass buttons that day were the same or very similar ID.

I was surprised how deep I had to go down for a button (about 7 inches), but when I finally had the target out, I kneeled down to locate it with the PRO-FIND 25 probe, but I didnt need it, as i saw the unmistakable glint of gold in the sun, sitting on the pile of dirt in the shape of a coin!

Before I picked it up, I already knew it was a half sovereign ! I spent a few minutes with my water bottle carefully washing it avoiding any touching or rubbing to see what date was on it. 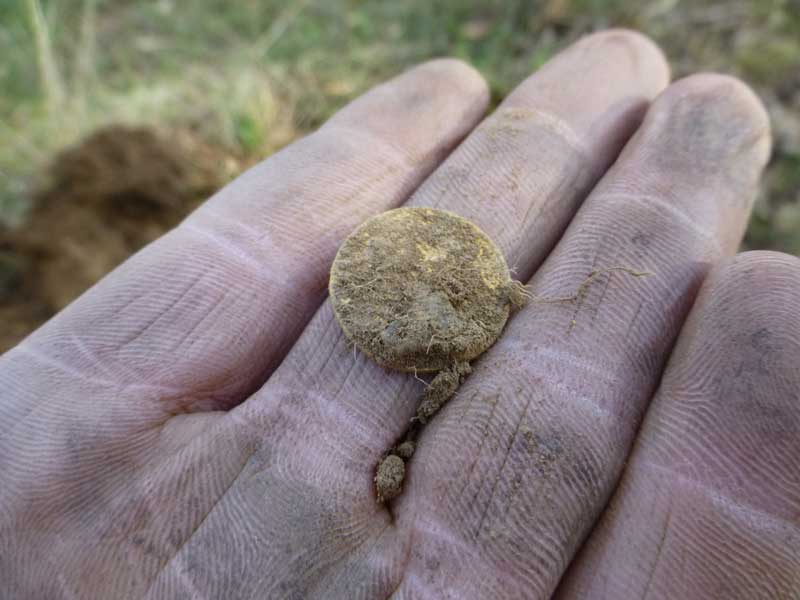 I was delighted to see the words “Sydney Mint” come up, and 1856 on the other side. After that excitement had subsided a bit, I remember telling myself , “it was worth the patience and perseverence after all”.

I still have faith in all these so called “flogged areas” if I have the patience, and it sure pays to check every little signal, regardless of how “iffy” it sounds. 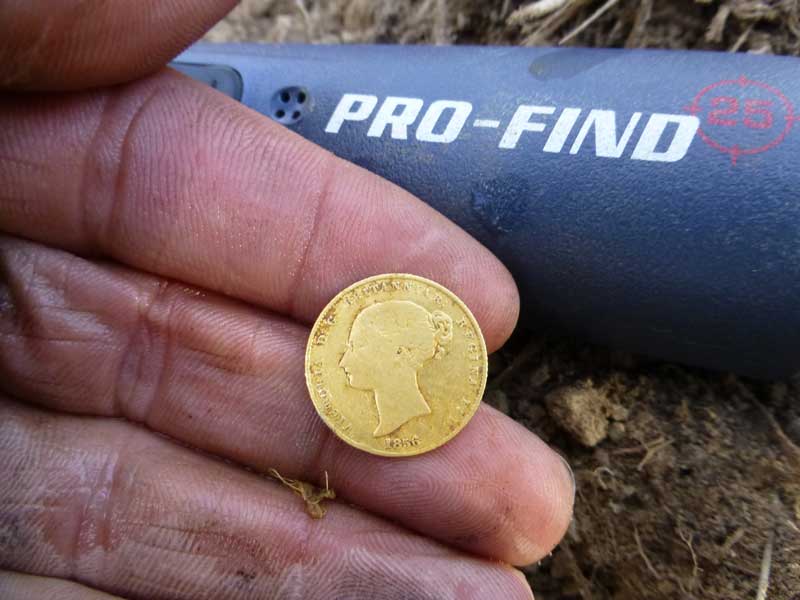 To learn more about the 1856 Half Sovereign visit Museum Victoria

The nugget was found at about a depth of 6 inches using a Minelab 8″ Monoloop Coil.

I was eyeing off a very small isolated patch of early reef workings outside Bendigo and each time I drove past had wondered whether they had been detected before, so one day I decided to walk over to the lone mine shafts and detect around them for coins/relics.

I could see a lot of nails and iron rubbish on the surface so I grabbed the minelab E-trac and began detecting around them. Not finding much at all other than iron junk I was about to leave when I got a very strong, high pitch non-ferrous signal. I immediately recognised the signal as potentially a large copper coin and began digging. Within only about 2-3 inches I uncovered the Murray & Christie Castlemaine merchant  penny token in good condition. 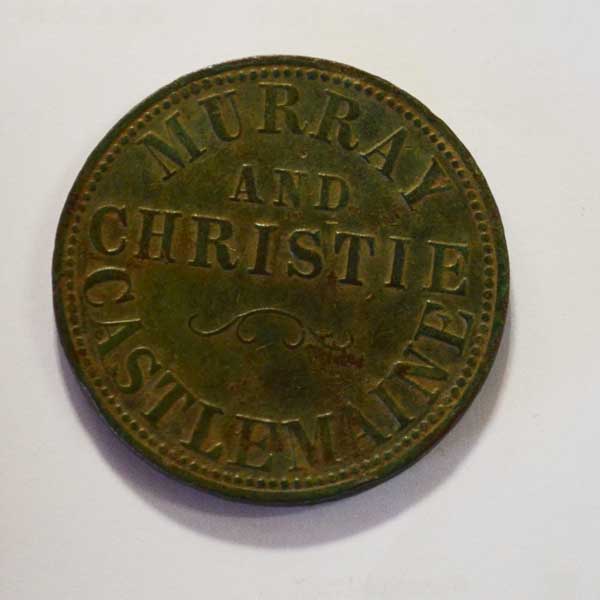 Murray & Christie were ironmongers, and merchants in china and glass ware. I have located several pictures of the store from between 1861 and 1865 and it appears they added a second story to their store in about 1862.

I will update this post shortly with an image of the orginal building.

Going back to the site where I found the 1oz gold nugget with my Minelab CTX 3030, I took out my Minelab GPX 5000 to see if I could pick up some more gold nuggets.

I spent most of the morning digging junk targets but did manage 15 small pieces. In total for the half day I found 8 grams of gold, including a nice 4 grammer.

I also found a great Californian gold rush belt buckle from around the late 1840?s period. It was found about a foot deep in old gold workings. There is so many targets still to dig in this site i anticipate months of digging ahead.

Below are images of some of the finds for the day. 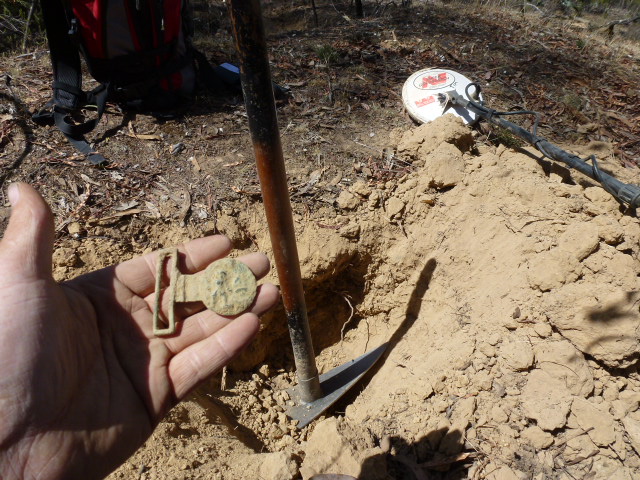 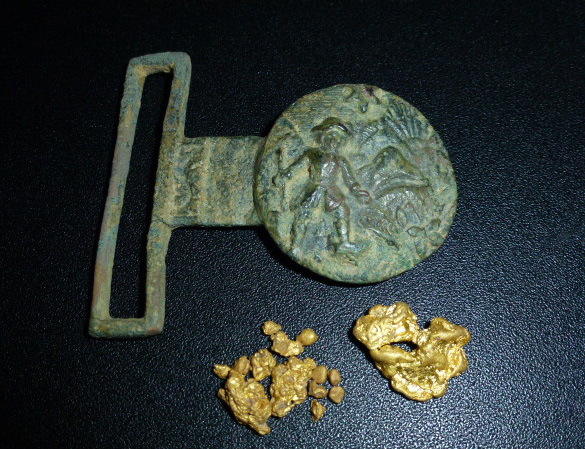 So I went back to my favourite coin/relic site near the old gold mining camp to try find some more coins and buckles I may have missed previously with the Minelab CTX 3030.

On the side of a steep slope which leads into the gully I dug a target which, on the CTX 3030 was the same ID as a sixpence, and since I had dug many here before I was excited to think I may have another.

After 4 inches digging hard clay I was very surprised to see this little beauty in my hand.

I never once thought I had any chance of finding gold nuggets in this location with this detector .

The sunburn and 2km walk into the isolated mining camp was worth every painful step.

Next time i go back, i still wont be expecting this again.. Absolute fluke.

To view a video about the nugget find please visit http://www.youtube.com/watch?v=AdF3CQ5XC5E 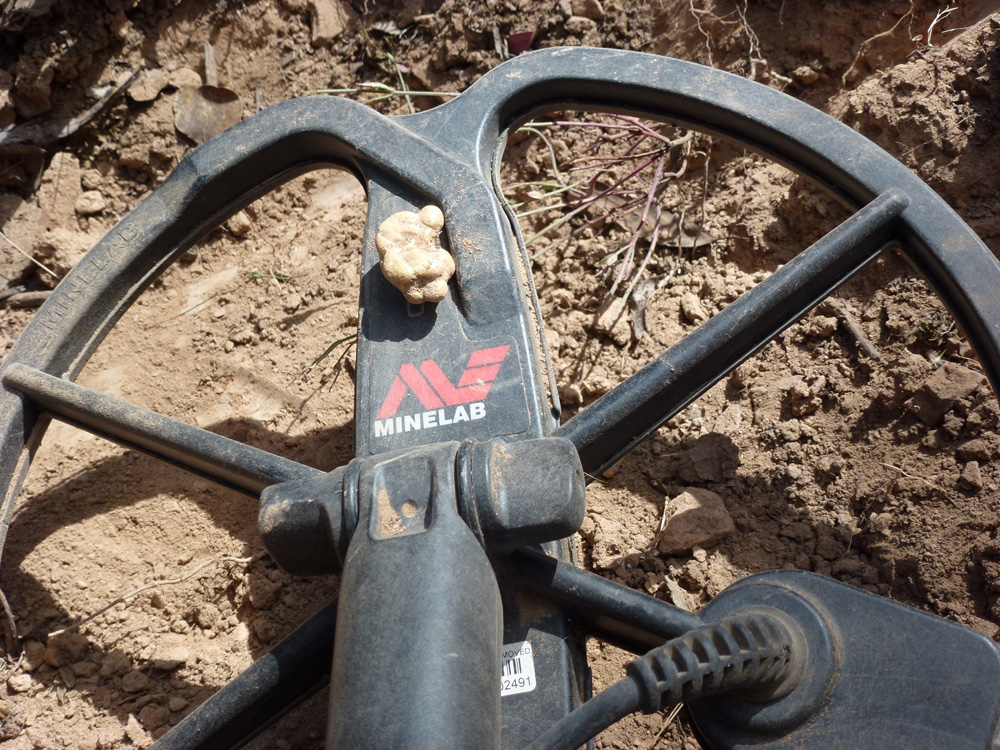 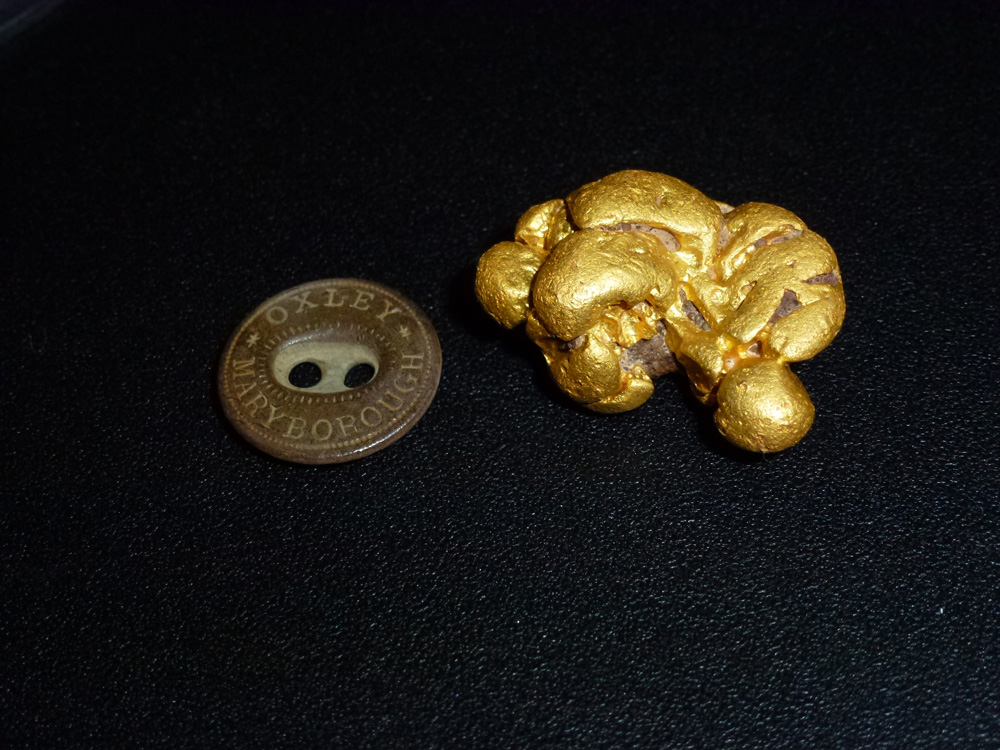 A BendigoGold customer sent us photographs of some of his finds that he had found with a recently purchased Minelab GPX 5000.

All the finds were found within 20 minutes of the Ballarat Area. 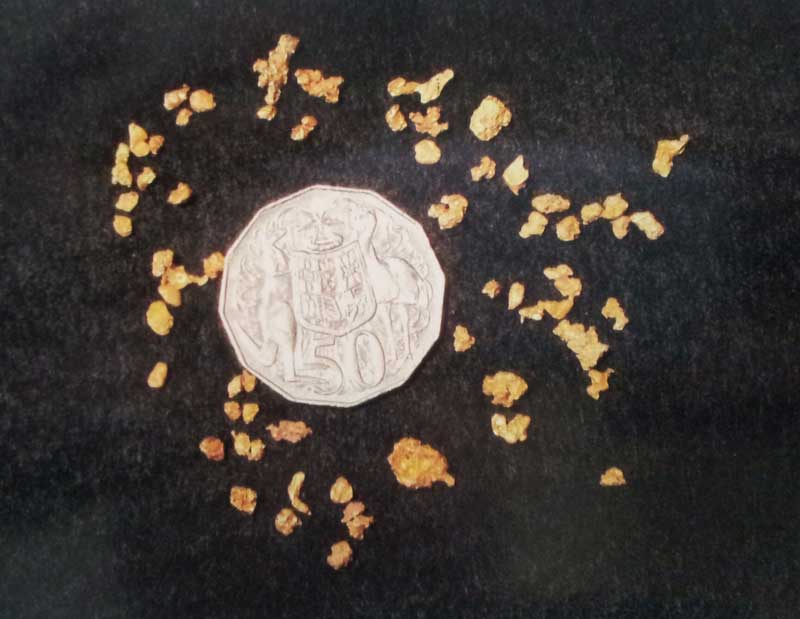 Above is a sample of the gold nuggets that were found. The fifty cent coin is for size comparison. 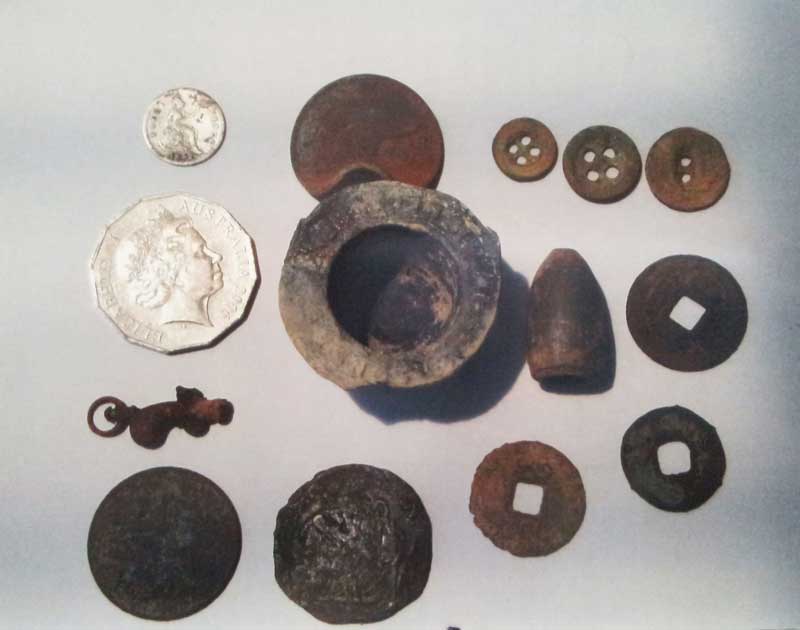 The treasure finds above were also found with the Minelab GPX 5000.

The Finds above include:

Not long after I purchased the Minelab CTX 3030 treasure detector, I went over many sites that I had already detected with the Minelab E-TRAC and found a lot of stuff that I had missed.

This cricket belt buckle was found at a new site I found while detecting my old spots.

I was happy to find it in one piece and with its centerpiece. 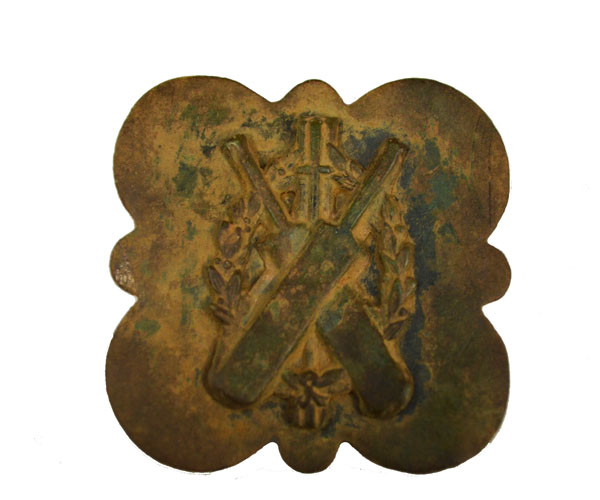