“Those look like detector holes”, Jill said, pointing to the right-hand side of the track, as we drove along. The terrain was flat, and quite uninteresting, but, sure enough, someone had obviously found some gold in the previous few weeks. It was 4.30 in the afternoon, but we decided to stop for a short time, and see if any nuggets had been missed. Jack picked up a couple of small pieces, and Jill decided to try the left-hand side of the track, where there was no sign of recent activity, and retrieved a couple of pieces in a few minutes. We had heard that a couple in another prospecting group were working on a patch in the area, but these holes were made prior to the last rain.

Returning the next morning we saw their vehicle 100 metres further over on the RH side!!! Not wanting to intrude, even at a distance, we kept driving. A few days later, having heard that the group had moved on to another mining centre, we went back to see how far they had extended their patch, but there were no holes on the LH side. Over the next two days, 137 small nuggets were added to our gold tally by slow, careful detecting, plus 31 that had been missed by the other group in their area. Having exhausted that patch, and not coming across anything else significant, it was time to look further afield.

Moving north, we set up camp in an area that had proved fruitful on a couple of previous trips, but it had become very well known, and heavily worked. Jill was becoming a bit discouraged, as neither of us could get even .1 of a gram in spots that had previously been quite productive. How exciting, then, to see Jack wielding his pick with force into a deep hole! On joining him, the prediction was – “being on the side of a creek, it’s probably junk!” However, a few inches further down, his hard work was rewarded with a very attractive 43 gram nugget. 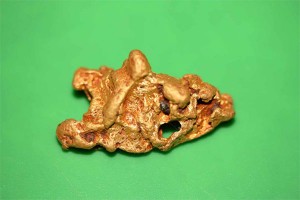