On the 8th of June my cousin and I were off to Kalgoorlie WA for the gold prospecting adventure of a lifetime. After 3 days of driving from Melbourne, stopping at Port Augusta and Eucla we arrived at Kalgoorlie.
At the Superpit we met our guide and our fellow prospector from Ballarat. We drove north from Kalgoorlie and set up camp in a shearing shed, as the weather forecast was for some showers. We started gold detecting on some pushings (an area where gold had been found before and the area had been bulldozed). By nightfall my cousin and I had both found gold.
In the morning we would detect new ground, looking for patches and in the afternoon we would detect the pushings. We found gold every day.
One of the highlights for me was about half way through the 12 day tour when I got a definite but not loud signal using my Minelab GPX 4500 metal detector under a bush. The soil was very soft with small stones in it. I dug down about 30cm and putting the detector in the hole realised the target was on the side of it. I had already dug it out. Picking up some of the dirt with my hand I felt something heavy. It turned out to be a beautiful 21 gram gold nugget. As a result, we spent quite a bit of time around there and found 2 other small pieces.
On another day my cousin found a small patch that yielded about 15 pieces for about 20 grams. During the trip we learnt different ways to tune our detectors and what ground conditions to look for.
On the way home, south of Kalgoorlie, we had a chance to get onto a mining company’s lease. We put our new learned skills into practice and found 2 gold pieces coming in at just under 10 grams. By the end of the trip we had detected for about 60 hours (12 days) and found 75 pieces of gold weighing 100 grams.

What a great time we had.
David 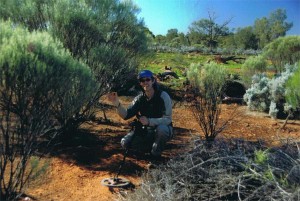