Jack and Jill’s most northerly prospecting spot gave only mild success over quite a few days, with only one area that had been previously scraped to remove the surface stones, providing a number of small nuggets. On the last day before moving, and looking for greener fields, Jack decided to try again on a bulldozed area, which had almost all the soil removed, right down to bedrock. Beside the dozed section, he heard a very faint sound, (probably just ground noise) and investigated, just in case it was a metallic signal. After removing 30 cms of soil, he reached rock, and, by this time, the signal had become quite definite. As rock does not produce rubbish, it was time for some hard work with the hammer and chisels, and after digging 15 cms deeper; he uncovered a nice specimen in quartz, containing about 27 grams of gold. 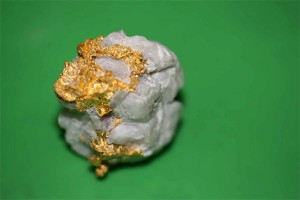 As it is almost time to return to Victoria, we will conclude with a snippet from another location further to the west, which has reminded us not to be discouraged by the evidence of others having detected an area before us. We had never visited this particular goldfield before, and spent some time driving around, looking for likely auriferous ground. However, there were a number of prospectors in the area, and every hill and gully appeared to have a vehicle parked on it.

Jill spotted some scrapings which appealed to her, but a prospector was right in the middle of the area. Returning a few days later, it was surprising to find there were virtually no new holes dug, but perhaps there was no gold left anyway, we thought! Within a few minutes Jill had 4 pieces, and Jack soon followed with a 3 gram nugget. Thankfully, the previous prospector will never lose any sleep over missing 17 yellow treasures, weighing a total of 15 grams.

Well, until the 2013 prospecting season,

From Jack and Jill.